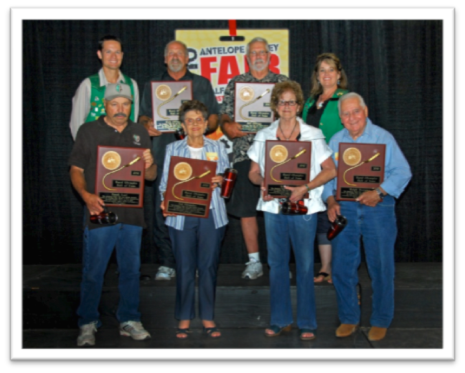 The Rural Olympics Hall of Fame committee selected the following seven candidates for induction in 2010. 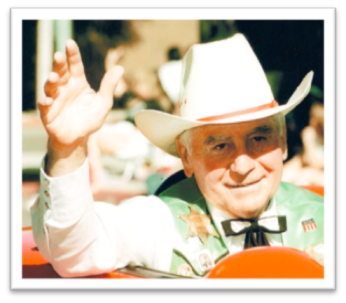 Ralph Bozigian served nineteen years on the Antelope Valley Fair and Alfalfa Festival Board of Directors from 1983 through 2001. He was one of the most active in obtaining the 135 acres for the new fairgrounds.

Ralph’s enthusiasm is contagious. His calm demeanor, confident leadership and exemplary commitment to improving the Rural Olympics and providing a great show for the spectators for several decades has earned Ralph the respect and admiration of every person fortunate enough to have served on the Rural Olympics Committee with him. Ralph Bozigian was presented with the Western Fairs Association Blue Ribbon Award in 2002. 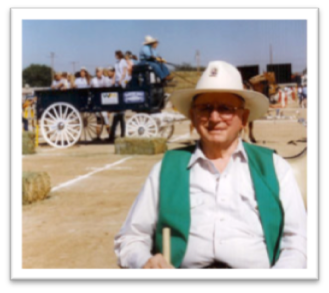 Serving on the Board of Directors at the Antelope Valley Fair and Alfalfa Festival has been a common trait of the Eliopulos family since Ted’s cousin Gus served on the first board in 1941. Ted Eliopulos was a fair Director from 1973 through 1993, and his son Darth has been a Director in charge of the Rural Olympics for several years.

Ted was the official starter for the Rural Olympics during his twenty year tenure as Director. He became Director in charge of the event in 1974. Having grown up on an alfalfa ranch and being a rancher until 1960, Ted had a real understanding of and respect for the men and equipment competing in the unique contests of the Rural Olympics.

Ralph Bozigian called his friend and co-director a “tough hombre” when it came to enforcing the rules and a real “Mr. Antelope Valley” when it came to anything to do with his home, the fair, and the Rural Olympics in particular. He is especially remembered at the Rural Olympics with the green flag in his hand, and as any contestant from that era will attest, you had better be paying attention and be ready when you got to the start line because ted was not one to hesitate with the start flag. Ted Eliopulos was a Western Fairs Association Blue Ribbon Award recipient in 1996. 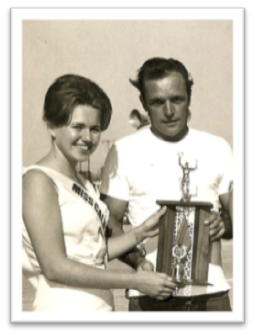 His finest moment came in 1968 when he and his brother broke the ten year old record set by the legendary Losey Brothers in 1958. The Loseys had owned the Hay Loading record since 1950. In 1970 he partnered with Tom Cissel and again set a new record time. 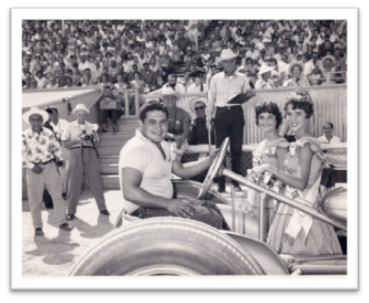 The fastest paced competition at the Antelope Valley Fair and Alfalfa Festival Rural Olympics since its’ origin was the mile and one-eighth Hot Rod Tractor Race run from 1952 through 1962, and again from 1972through 1975.

These tractors were modified Allis Chalmers farm tractors, some with Model T Ford front ends, considerable engine work, no governors, straight exhaust, and reversed or modified gears in their rear ends. They also used the lighter weight turf tires rather than traditional field tires. These loud and sleek racers were capable of speeds of 85 MPH in the quarter mile.

Frank Lori was one of these fearless competitors from 1955 through 1962. He placed in the top three seven of the eight years he raced, winning on four occasions, while twice setting new Rural Olympics records. Only Don Padgett equaled Frank Lori in his number of victories in this exciting event. 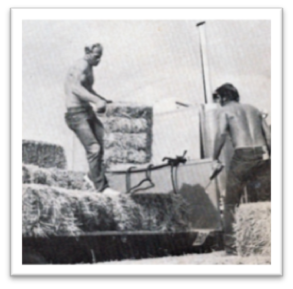 Bill and Leonard placed in the top two five times. Bill’s greatest Rural Olympics moment came in 1973 when he set a new record in the Truck and Trailer Backing Contest. This record was not broken for twenty two years by Dean Berg in 1995, though it was equaled in 1993 by John Hemme. Only Walt Detjen’s 1972 as yet unbroken record in the Tractor With Sickle Bar Stake Race has a longer duration. 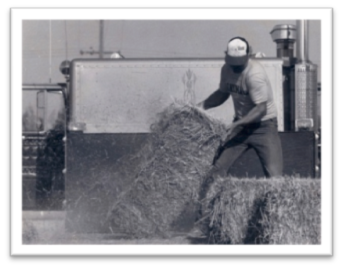 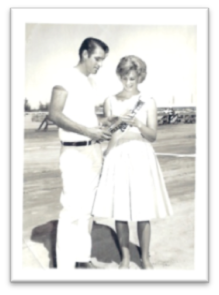 Bob Yates competed in the Tractor and Semi-Trailer backing over a period of thirty five years. He won the difficult test of skill the first time he tried in 1962. He also took home the first place trophy and prize money the last time he raced in 1995.

Bob missed several of the years in between because of cancer, but in the years he was able to compete he placed in the top two ten times with nine trips to the winners circle. He established new records in 1965 and again in 1980.

The highlight of Bob’ Rural Olympics career came in 1964 when he took first place honors in both the flat trailer and the closed body classes of the Tractor and Semi-Trailer Backing competitions. A perpetual trophy in for this event was awarded by Bob’s family I his memory beginning in 2008.