Thanks to the generosity of our donors and unselfish dedication of our volunteer members, the following projects have been successfully completed. 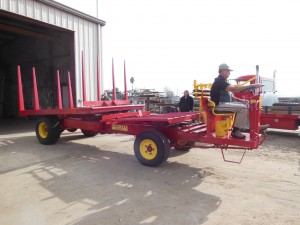 This photo shows the  completed restoration of the Model 1045 that Tom Bookman had donated as Denny Butler drives it from Don Grey’s shop in Selma.  Every detail has been restored to showroom quality by Don Grey and his crew; Lloyd Allen, Ron Barnes, Denny Butler, and Ed Freund. 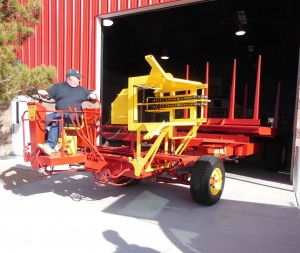 Above: Scott Harter delivers 1045 to museum 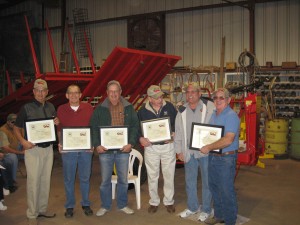 The windmill at right was relocated from the Simi Brothers Ranch in East Lancaster to the AV Fairgrounds in time for the 2011 Antelope Valley Fair and Alfalfa Festival.

Thanks to Giovanni Simi and family, and to the efforts of members Jerry Sterk  and Jess Baker.

The AVRM is especially grateful to: 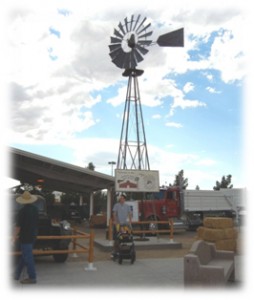 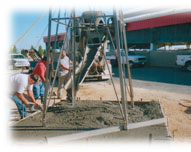 Wartime in the AV and Timeline of AV History Displays 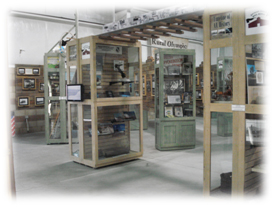 Our  Timeline of AV History for the 2011 exhibit included displays by the Antelope Valley Indian Museum assembled by Peggy Ronning of the California State Park,  the Edwards AFB Flight Test Center Museum assembled by Tony Moore from that museum.   Displays showing The Southern Pacific Railroad, early Lancaster, 20 Mule team Borax, NASA, and the invention of the Haro-Bed Bale Wagon in Lancaster were created by members, Sheila Sola, David Pickus, Kendal Lenton, and Bill Rawlings.  The newly built displays w were connected by an overhead railroad track. 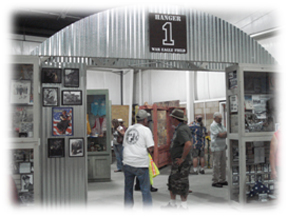 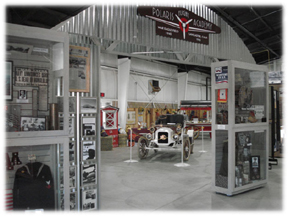 Our goal for 2010 was to design and build new permanent displays.  Front and center for our 2010 exhibit at the AV Fair was this Welcome Kiosk.   Built to resemble a barn, it was constructed of rustic wood and recycled corrugated steel  sheets.   The cabinet serves several functions.  The doors served as donor boards on one side, visible from the front.  These signs listed all of our donors on one door , and volunteers and members on the other.  The interior contained a memorial to Hall of Fame Inductees and Donors who had passed in the previous year.  There was also a guest book,  membership and donor information, and a place to make a donation.  The backs of the doors and rear of the kiosk were covered with recycled redwood fencing and corrugated metal.  They held the pictures and tribute to our first Rural Olympics hall of Fame Inductee,  Don “Jake” Jaqua SR.  Rural Olympics Hall of Fame Inductee display For 2010 we also created six new display cabinets and seven 5′ high x 11′ wide walls.  These walls were 100% recycled redwood fencing and framework.  The walls were built to function like slatwall.  Our volunteers also cut new mats, frames, and glass for all the inductee photos and tributes.  We built enough walls so that each year’s inductees have their own wall, and will be adequate through 2010. 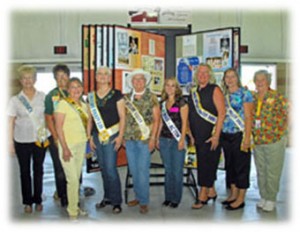 2010 also brought the all new community queens exhibit.  AVRM member Sheila Sola (Miss AV 1965) dove into hundreds of hours of  research and graphic design work  to assemble this striking and popular feature, which will  be a permanent part to the museum.  Each community queen since 1944 listed.  Each year had an individually designed poster containing pictures, names,  graphics from that year’s fair, and much more.   This project will grow as it is updated annually and new information is discovered. 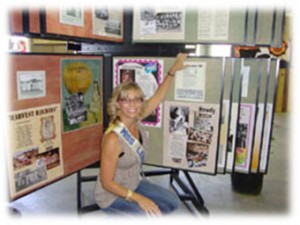 Above: 1987 Miss Lancaster, Jennifer Slater-Sanchez checks the poster honoring her  and the other 1987 community queens. Wayne Arnold and his brother Eddie both raced this 1949 Ford tractor in the Rural Olympics in the Tractor Race and the Tractor Stake Race with Sickle Bar in the early 1950s (see 2009 Rural Olympics Hall of Fame inductees).  Wayne recently restored this relic, and offered to loan it to the AVRM for the 2010 AV Fair exhibit.  He was so pleaded with the way his tractor was displayed and with the new museum displays, that he donated the tractor to the museum.  We are very graetful to Wayne for his generosity.  He is one of our Silver Sponsorship Donors. 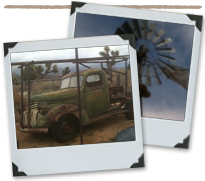 DONATE FUNDS TO A PROJECT

OTHER WAYS
TO HELP

Have a resource or skill that could help with one of our projects? We’d love to hear from you…