The Rural Olympics Hall of Fame committee selected the following seven candidates for induction in 2007. 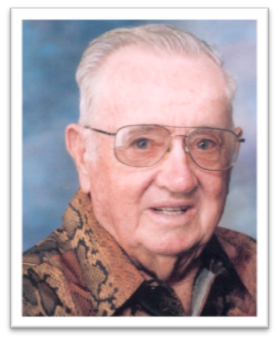 Olin Derrick has been connected to the fair since before World War II. He helped his stepfather in-law, Charles Cox with hooking up his team of one horse and one mule for the Pulling Contest (Light Weight), which they won in 1938 when the competition pitted Eastside ranchers against Westside ranchers and was known as Farm Contests before the war, Field Day Events after the war, and eventually the Rural Olympics in 1950. They won both the heavyweight and middleweight team pull in 1941.

Olin hauled gravel for the roads and paths to the new fair grounds (forty acres on Avenue I and Division Street). He was also a Starter, Committeeman, Safety Officer, member of the Protest Committee, and Judge before and after the war contributing for over 50 years. He retired the year after he was knocked down by a truck which was backing through the chutes. He does not remember what year it was. 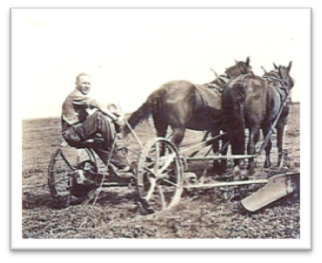 Les Fredeen is one of the select few participants of the Rural Olympics without whom there may never have been a permanent home for the Antelope Valley Fair & Alfalfa Festival. He is also one of those responsible for developing the Field Events of the 1930’s into the current day Rural Olympics. Les donated much of the hay used for the early horse arenas and Rural Olympics events from his ranch at 30th Street East and Denis Road (Avenue N).

In 1937 Les, along with his work horses Jerry and Rowdy, won the Team Pulling Contest (heavy weight). The team pulled 14 ½ tons on a piece of equipment with locked brakes. This equipment was brought to the fair by a private concession which traveled the world. In subsequent years Les, Jerry, and Rowdy won the Team Backing Contest and the Team Walking Event.

In 1938 Les placed second in the Hay Baling Contest held at the Gordon Ranch on the Eastside. In 1939 the eliminations for the Baling Contest took place at Les Fredeen’s ranch with the Eastside vs. Westside final being held in front of the bleachers at the new fairgrounds using 40 tons of loose hay scattered on the ground by volunteers such as Les. 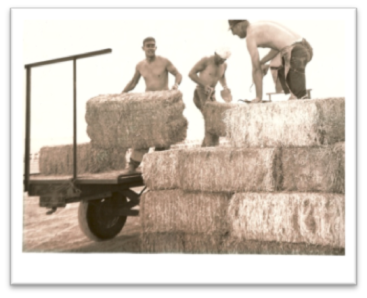 Butch started participating in the Rural Olympics in 1941 at the age of 14 in the Tractor Race with Sickle Bar. He also wanted to race in the Men’s Tractor Race but the rules stipulated contestants must be at least 18 years old. He was not the winner that year but he was hooked.

From 1942 through 1944 the “3-Day A. V. Fair” was cancelled because of World War II. The Fair resumed in 1945 but the Rural Olympics was rained out. Butch was back in the Rural Olympics when they resumed in 1946. He competed in the Tractor Race with Sickle Bar, and Men’s Tractor Race which records show he defeated George Harris in a special heat race.

In 1949 Butch and R. V. Hill tied for first in the Men’s Tractor Race as they both set a new record for that event. With the exception of the time he served in the Korean War, from 1951-1953, Butch competed in the Rural Olympics every year until the 1970’s. Butch, along with teammates Pete Ritter and Frank Russell, won the Mechanical Field Loader Hay Loading contest in 1950, 1958, 1959, and1960.

After he gave up competition Butch continued to work on the Timers committee, and the Event Setup Committee as well as Chairman of the Safety, Parade and Assembly Committee through the 1990’s.The Blue Ribbon Award was presented to Butch in 1978 for his outstanding work at the Rural Olympics. In 2007 at the age of 80 years Lawrence “Butch” Godde was inducted into the Rural Olympics Hall of Fame. 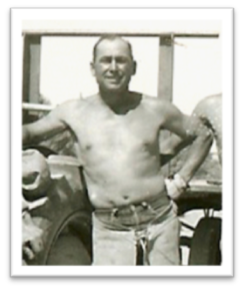 Len became involved in the Rural Olympics in 1953 when friend and neighbor Bobby Jones told hIm he wanted to get a team together to compete in the Hay Loading with Mechanical Field Loader contest. He and Martin Josund started practicing for a run-off against other farmers to be held at the Eastside School Summer Events. But no other teams showed up.

When Fair time arrived the team drove the tractor, wagon, and hay loader to the Fairgrounds to compete in the Rural Olympics and won first place over the Westside team. This was a longtime “bragging rights” event pitting the Eastside farmers against the Westside farmers. Len won again in 1954 with teammates Bobby Jones and Monte Walters, and again in 1955 with Jones and new teammate Jack Richards, this time setting a new record of 7 min. 17 sec. 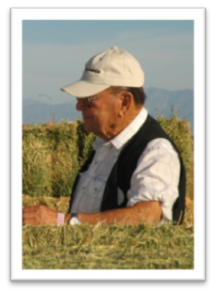 Len continued to compete in the Hay Loading Contest and also entered his Ferguson tractor in the Men’s Tractor Race for a few more years, winning again in the Hay Loading with Mechanical Field Loader in 1957 with teammates Jack Richards and Steve Michel.

Being an alfalfa farmer Len was also a longtime participant in the “Alfalfa is King” competition for the Best Hay in Antelope Valley. He won second place in1956, and won third place in 1960 and 1988. Len gave up competition but continued as volunteer on the committees for the field events ending up as the Head Judge of the Rural Olympics from 1990’s-2005. He received the Blue Ribbon Award in 1978 for, among other things, his contributions to the Rural Olympics.

Len was active in the Rural Olympics for over 50 years. 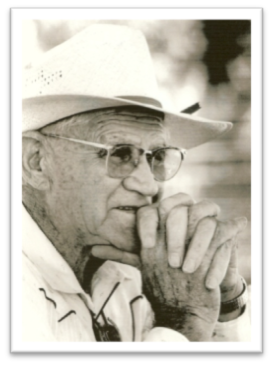 Len Leydecker was a contestant in the very first Hay Loading Contest held at the Antelope Valley Fair in 1935. According to the October 10, 1935 Ledger Gazette the contest was held at Hooper Field, the A. V. High School football field, with 4000 spectators in attendance. There were eight teams consisting of a driver and a swamper who had to hand load 64 bales onto a truck, tie it down, move across the field and unload and restack in a definite manner. Len was the driver and Johnny Sellers the swamper on team #1, sponsored by Fernando Valley Milling Company, where it is believed Len was the manager. They were the first team to finish but were disqualified because their fourth tier was imperfect with only twelve bales on the edge instead of fourteen. Len continued to compete in the Hay Loading Contest as the event grew into the Field Events which eventually became the Rural Olympics. In 1937 he and Haye Spencer set a new record of 14min.41sec.

Len Leydecker was known as Don Jaqua Sr.’s “right hand man” and was a starter and committeeman into the 1960’s, donating and volunteering uncountable hours of his time. Len was a Blue Ribbon recipient in 1974 because of his involvement in the Rural Olympics among other things Len Leydecker passed away July 19, 1990 at the age of 87 years. 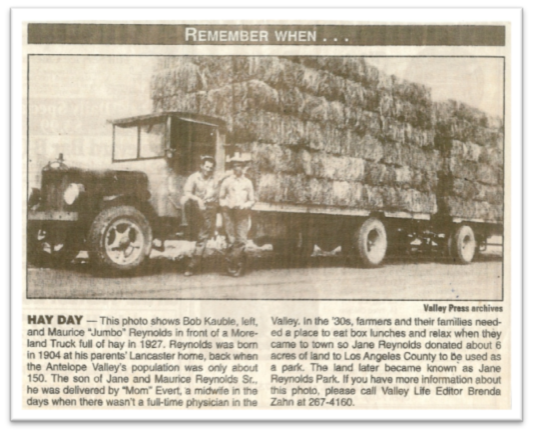 Maurice “Jumbo” Reynolds was one of the pioneer supporters of the Rural Olympics and the Antelope Valley Fair. The fair was held at the Antelope valley High School in the 1930’s. Maurice donated his Reynolds Trucking trucks and workers to deliver and set up the alfalfa for the first hay arena and various events and arenas for many years. Reynolds Trucking sponsored the second place finishers in the Hay Loading contest in 1937 and continued donating trucks and sponsoring competitors in the Hay Loading as well as Truck Backing contests.

Many of the men and women involved with the early Field Day and subsequent Rural Olympics are responsible for the Antelope Valley Fair & Alfalfa Festival’s existence, and “Jumbo” Reynolds is second to none in his dedication and generosity. He donated his trucks and drivers to deliver the alfalfa, which was donated by the ranchers of Antelope Valley, to the mill. The money from this hay was used to buy the fairgrounds property on Avenue I and Division Street which was the permanent home of the A. V. Fair from 1938 until 2003. 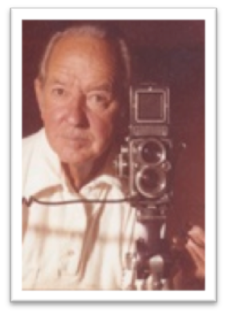 Frank Stubbings was one of the first professional photographers to take pictures of the events and people of the Rural Olympics. He came to the Antelope Valley from the Los Angeles area though originally from Detroit taking aerial photos and opening his first photography studio on Lancaster Blvd. and Beech St. He later moved his studio south of Lancaster Blvd. on Beech St.where he remained until his retirement. Frank got involved with the Rural Olympics 1947-48 taking aerial and ground action shots of both Field and Mechanical Hay Loading Contests, Men’s and Women’s Tractor Races, Truck Backing Contests, Tug-of-War between the Eastside and Westside farmers, and over the years all of the various Rural Olympic Contests.

Frank not only photographed the Rural Olympics, he was also at the A V Fair with his beloved Rolleiflex camera to capture excitement at Horse Shows, 4-H and open events, Rodeos, Cow Roping, Bull Riding, Rodeo Clowns, Kids “Catch a Greased Pig” contests, pie and watermelon eating. He was also there for the Rainbow girls ushering in the grandstand during Rural Olympics as well as the Demalay Boys helping out, the community queens, the senators, the congressmen, as well as Barry Goldwater Jr. competing in the Antique Auto Potato Race, and the Chris Shery Chefs Lamb Barbeques.

After Frank developed his photos he would post them the next day on large poster boards next to the front entrance information booth and in his large studio windows where you could order a large 5 x 7 photo. Many of Frank’s pictures are displayed annually at the the Old-timer’s Barbeque as well as in this museum. Retiring from the Fair events in 1990 Frank was still taking aerial pictures of ranches and businesses around the Antelope Valley. Frank Stubbings died August 6, 2005. 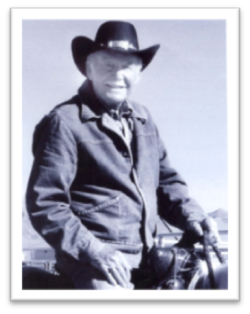 Keith Tindall was recruited by Whit Carter to serve on the Rural Olympics Committee in the 1940’s. Because he sold, maintained, and repaired many of the watches and timepieces for the residents of Antelope Valley as a premier jeweler in Lancaster for so many years, it is not surprising that he was recruited as a timer. He served the committee as a timer as well as judge for over thirty years until 1973.

Keith was never a competitor in any event. It is for his countless hours on the field and attending committee meetings, as well as his contributions and input to help the improvement and insure the success of the Rural Olympics, that Kieth Tindall is awarded the “Golden Hay Hook” and inducted into the Rural Olympics Hall of Fame.