Little can be done when one has 10 pounds of stuff but only a 5 pound box to put it all in. Such is the case for the Antelope Valley Rural Museum located on the Antelope Valley Fairgrounds in Lancaster California.  The current and temporary home of the museum is a 6000 square foot red metal building, built in the image of a barn, known as the Farm and Garden Building during the annual Antelope Valley Fair every August.

One Board Member of the AVRM, Sheila Sola, in her determination to create certain displays for which the museum has no space, has found her own solution to some of the “space” problems the museum suffers…MINIATURES. Small and built to scale, Sheila depicts scenes, buildings, and history patterned from authentic photographs showing Antelope Valley’s bygone times. 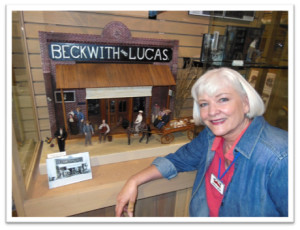 Sheila’s love affair with miniatures began when she asked her father to help her build a doll-house for her four year old daughter.  She continued making dollhouses and other buildings with her father until he passed in 2002.   The spark diminished after his death until the museum offered new purpose and opportunity for her hobby.  As the AVRM’s Historical Timeline was expanding in 2011, Sheila chose the Beckwith and Lucas General Store in Lancaster to miniaturize.  A picture from local historian and author Norma Gurba’s book   “Lancaster” was used as guide for the scene of activity and the building.  She scaled her piece down to the exact placement and number of characters and bricks.

Wanting to tell the story of the Borax mine in Boron, CA where she grew up, and  knowing the AVRM could not have a full sized display of  the famous Twenty Mule Team, Sheila recreated a 3-D diorama in time for the 2012 Antelope Valley Fair, depicting the mule train  in an accurate desert setting. The desert background is from a photo taken by Sheila along the original path used by the 20 Mule Team.  The scene is shown below and is a permanent part of the Rocks and Minerals display in the museum.

Creating a full sized mockup of a blacksmith shop was on the priority list of the museum early on, and was scheduled to begin construction in 2014, but time and space restrictions caused an indefinite delay.  The AVRM accumulated several blacksmith tools from various donors.  Not to be delayed in telling the story, Sheila built a scene depicting Lancaster pioneer blacksmith George Black in his shop on Beech Avenue and Eleventh Street (Milling Street).  This miniature is also modeled from a photo in Norma Gurba’s “Lancaster” book, and is complete in every detail including lighted glowing embers in the firebox.  A collection of old tools compliments the little blacksmith shop exhibit. 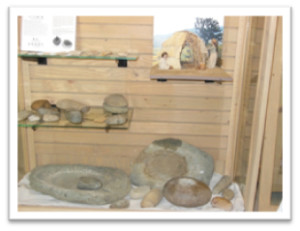 The Antelope Valley Indian Museum has been kind enough to loan the AVRM a few local Indian artifacts along with picture/history boards as the beginning anchor of the AV History Timeline. During 2015 two different donors gave several Indian artifacts found around the Antelope Valley. This doubled the Indian exhibit, and of course, opened an opportunity for building another miniature scene.  Sheila answered with a model Wickiup, which is a domed dwelling native to North American Indians, including those who traveled, traded, and lived in the Antel 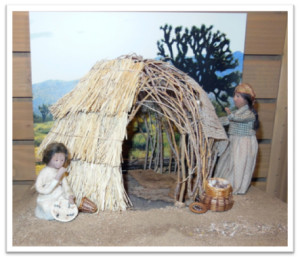 ope Valley.  This Indian exhibit and miniature Wickiup are to debut at the ten day 2016 Antelope Valley Fair and Alfalfa Festival beginning August 19th. It will remain as a permanent part of the AV Rural Museum Timeline of AV History.

This miniature look into history shows more than just a domed Indian hut.  The layers used to construct the hut are shown in the scene as well as two figures working on typical tasks.

There is yet another miniature being created by Sheila for the 2016 exhibit.  You will just have to come to the AV Fair this year to see it.

We’re constantly taking on new projects and need your help. Donations of any size are welcome and tax deductible…