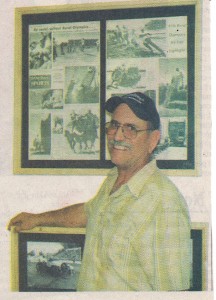 In May 2005, at a meeting of the Rural Olympics Committee, Bill Rawlings proposed founding a museum chronicling Antelope Valley’s history.  He wanted to start by creating a Rural Olympics Hall of Fame.

The Rural Olympics actually predates the Antelope Valley Fair.  It used to be known as Field Day, a day when farmers and ranchers got together in the mid 1930s to compete in a series of agriculture-related events.

Although the museum is years away, the Rural Olympics Hall of Fame is a reality, thanks in a huge part to the efforts of Rawlings and others, such as G. Simi, who teamed up with Rawlings to search newspaper archive for articles and photos on the Rural Olympics.

“The Hall of Fame is really personal for me,” said Rawlings, whose late father, Scott, is among the Hall of Fame inductees.  “My dad was a Rural Olympics committee member for many years and held the Model T event record for 23 years.  I held the record with my dad for 18 years.

My roots are deep in the valley.  My great-grandparents ran a hay ranch on the eastside in the 1920’s.”

2007 is Rawlings’ 40th year involved with the Rural Olympics.  Simi, whose mother, Pat, is a past fair board director, has been on the committee for 20 years—“Scott Rawlings recruited me to help, he said.

Both have heard rumors that the Rural Olympics might end as an event at the fair and move to Lancaster’s Fourth of July celebration.

“I figured if we’re going to lose it, we’re at least not going to lose the memory of it<” Rawlings said.  He turned to look at some of the photos of the Hall of Fame inductees.  “These are the reason the fairgrounds was built.  We are 20 to 30 years late in starting this.”

“(Rawlings’) passion for this is really contagious,” Simi said,”it fired me up.”

On his family’s old ranch, Simi found a late-1940’s Chevy truck that was used as a mechanical hay loader.  Similar trucks were introduced into the Rural Olympics competition in 1952 when mechanical hay loading replaced the hand loading event.

The truck, resting in the farm implement garden in the Heritage Park area of the fair, will hopefully be restored and included among the displays destined for the yet-to-be-built museum.

“It’s all about memories and history,” Rawlings said,  “I saw Butch Godde get choked up when he was inducted into the Hall of Fame.  Seeing that, I got choked up watching him too.

“The inductees are touched, their families are touched.  It lets us know we went the right direction.  It’s critical for us to keep the Rural Olympics at the fair.   It’s too big a part of this fair to just let it go away.”

We’re constantly taking on new projects and need your help. Donations of any size are welcome and tax deductible…